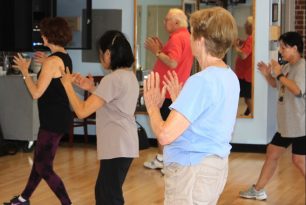 The Rye YMCA celebrated the first day of autumn—Friday, September 22—by offering free resources and classes on preventing falls to seniors. The activities tied into a nation-wide Falls Prevention Day, which was launched ten years ago by the National Council on Aging and a coalition of organizations.

Rye resident George Worthington said that he attended Standing Strong out of “curiosity.” “Balance is pretty important in our lives,” he remarked after the class. “Especially if you want to get through life safely. It’s a challenge for seniors every day.”

Fitness instructor Angela Hultberg who led the balance class and also teaches Enhance Fitness, observed that Tai Chi and other gentle physical activity can provide “an enriching experience that helps you get in touch with your movements.”

For more information on falls prevention and other programs for seniors, contact Penny Cozza, Active Older Adult Coordinator at 914-967-6363 or penny@ryeymca.org. 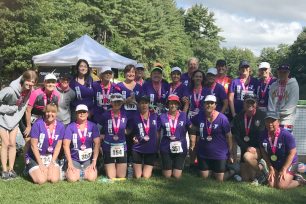 [September 12, 2017] It takes more than age, bad knees, illness and 60-degree water to slow the Rye YMCA’s Tribe. Twenty-eight members of this women’s triathlon training group traveled to Farmington, CT on Saturday, September 9 for the Wearsafe Women’s Triathlon. Ranging in age from 27 to 73, the women were part of a larger group of “Tribees” who trained for months for this difficult race, which included a half-mile swim in open water, a 12-mile bike ride and a 5K run. Seven of the participants in Saturday’s event were first time triathletes.

There were several challenges that day, noted Tribe coach Denise Cypher. After six years at the IronGirl competition in Sandy Hook, NJ, the group was facing a new race course in Farmington. The air was cool and the lake water even colder. Cyclists shared the road with traffic, rather than the closed course they were used to. And the run took place on hilly, rough terrain.

And then there were the personal challenges. Two of the women are going through cancer treatment. Another had recently undergone surgery. Others had trouble with their knees or had little experience with swimming. “So many people have challenges but they just don’t voice them,” Cypher observed. Yet every Tribee who showed up early on Saturday morning embraced the race with enthusiasm and grit.

Cypher and her fellow coach Sally Braid are inspired by the determination of the women. She also enjoys seeing the relationships that develop. “There’s so much camaraderie during the training process,” Cypher remarked. “I really like that they enjoy that part. You see people in their 70s planning to get together with people in their 20s for open water swims, bike rides or runs.”

Tribe members are also effusive in their praise for Cypher, Braid and swim coach Cathy Meeker. In a note sent to the Y after the triathlon, Emily Greer wrote “I never thought I would be able to do this type of event, but coaches Denise, Sally and Cathy helped me gain the skills I needed for the event and inspired me to pursue the challenge.”

Now in its seventh year, the Rye Y’s Tribe is open to women of all ages. For information about the next group, which will start in the spring of 2018, contact Diana Vita at diana@ryeymca.org or 967-6363.

Click below to watch the Rye Y Tribe 2017 Slideshow.