Two of the Rye YMCA’s most successful and highly regarded community health programs turned five this summer. The YMCA’s Diabetes Prevention Program and LIVESTRONG at the YMCA have reached hundreds of Y members and residents from across Westchester and Fairfield counties, giving them the resources, strength and courage to take control of their own health.

The YMCA’s Diabetes Prevention Program (DPP) is an evidence-based, one-year small group program for adults who are overweight and at high risk for developing type 2 diabetes, or have been diagnosed with prediabetes. Based on extensive research by the National Institute of Health, the YMCA’s DPP has reached nearly 46,000 participants across the United States since 2010.

“When we launched the YMCA’s DPP in 2011, we were only one of a handful of Ys nationwide chosen to provide this program,” remarked Tanya Stack, Regional Coordinator for the YMCA Diabetes Prevention Program. “We knew how important this would be for our members and our community. More than 29 Americans are living with diabetes and more than 86 million have been diagnosed with prediabetes. Countless others don’t even know they have prediabetes. We knew we could make a difference if we gave people the tools to prevent this debilitating disease.”

In addition to classes offered at its facility, the Rye Y has forged a strong partnership with Open Door Family Medical Centers, a Federally-Qualified Health Center. Through this joint effort, the Y trained bilingual lifestyle coaches who are now offering Spanish language classes at Open Door’s facilities in Port Chester and Ossining.

This summer, the Rye Y is working with Hudson River Health Care (HRHC) to expand the YMCA’s DPP to Yonkers. HRHC is one of four partners selected by the New York State Department of Health to implement its Local I.M.P.A.C.T Program, an initiative funded by the federal Centers for Disease Control. HRHC reached out to the Rye Y because its Diabetes Prevention Program is the only CDC-recognized lifestyle change program in Westchester County.

During the past five years, over 140 adults have enrolled in the YMCA’s Diabetes Prevention Program, many of them finding it “life-changing.”

Nearly everyone has been touched by cancer, either through their own experience or through the diagnosis or a friend, family member or colleague. Recognizing the need to support adults who are facing this terrible disease, the Rye Y launched LIVESTRONG at the YMCA in July 2011. 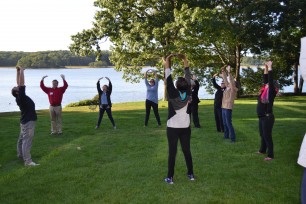 their total health.  Over the past five years, 459 adults have grown stronger through the program’s focus on physical activity, stress reduction and emotional support.

Along the way, LIVESTRONG at the YMCA reached several notable milestones. In 2013, the Rye Y was recognized by YMCA of the USA and the LIVESTRONG Foundation with the Excellence and Innovation Award for hosting LIVESTRONG week—a celebration of cancer survivors and their families that has continued every year since 2012. In 2015, the Rye Y started an alumni group to keep program participants connected to the Y and each other.

Also in 2015, the Rye Y became the first YMCA in the country to offer LIVESTRONG at the YMCA at a Federally-Qualified Health Center. Thanks to a collaboration with Open Door and Soul Ryeders, the Y began holding Spanish-language classes at Open Door’s Port Chester facility.

Lori-Beth Patsy, an Open Door exercise physiologist who led the first class, wrote of her group: “You have NO idea how grateful they are for this. After going through what they went through and then not being able to share their stories because of language and other barriers, they were so happy.”

“The YMCA’s Diabetes Prevention Program and LIVESTRONG at the YMCA paved the way for a range of health and wellness programs for our members and the community at large,” observed Laura Tiedge, the Y’s Senior Director for Healthy Living. “Thanks to the success of these two programs, we’ve been able to build new partnerships, leverage additional funding and make a real impact, not only in the Sound Shore area, but also throughout Westchester County.”

For more information about the YMCA’s Diabetes Prevention Program, LIVESTRONG at the YMCA or any of the Rye Y’s community health programs, visit www.ryeymca.org or contact Tanya Stack at 914-967-6363, ext. 206 or Tanya@ryeymca.org 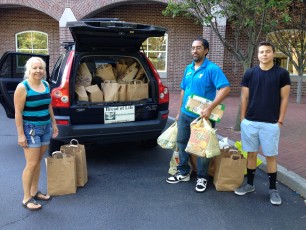 [August 5, 2015. Rye] Rye YMCA members and camp families donated 75 grocery bags filled with non-perishable food items during a recent food drive for Bread of Life. Held on July 28 and 29, the project teamed the Y’s Togetherhood Committee with its summer camp for double the impact.  Mrs. Green’s in Rye also stepped up, donating a case of large paper grocery bags to package the donations.

“We’re very appreciative of the YMCA’s efforts on behalf of those who are hungry in our community,” remarked Sue Wexler, the Director of Community Outreach and Youth Engagement for the Bread of Life.  “When local organizations work together, we can really make a difference in the lives of others.”

Togetherhood is a national YMCA social responsibility initiative that engages Y members in community service. Since its formation in May 2014, the Rye Y Togetherhood Committee has organized ten projects for a range of community-based organizations including The Sharing Shelf, Don Bosco Community Center, St. Peter’s Episcopal Church, My Sisters’ Place, Bread of Life Food Pantry, St. Ignatius Middle School and the Rye Nature Center. Last month’s food drive was coordinated by Togetherhood Committee members Bob and Bill Blake. The brothers were helped by eight additional Y volunteers, including three teenagers, and a team from the Bread of Life.

The Rye Y’s summer camp will engage 1,340 children and teens by summer’s end. Through a range of programs, including sports, swimming, art, STEM activities, gymnastics, and trips to fun and educational venues, kids are learning new skills, making friends and building confidence.

Bread of Life meets the urgent food needs of underfunded and undersupplied pantries, shelters, and soup kitchens throughout southern Westchester County.  The organization serves over 400 families and individuals every week at its Rye food pantry alone and thousands more at other facilities.